Hazards for hedgehogs and how to avoid them

There are many dangers, of which we are often not even aware, which threaten the safety or even the lives of hedgehogs. Many hazards can be easily recognised and – often with only little effort – avoided or removed, if you look round your own garden and neighbourhood through a hedgehog’s eyes.

We can avoid many an animal’s suffering by responsible and careful interaction with our environment.

See our flyers on hedghog hazards 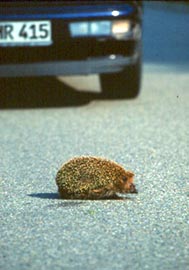 Countless hedgehogs are killed by traffic. The death toll can be reduced by careful and considerate driving and by keeping to the speed limit – especially at dusk and at night in semi-rural, residential areas.

Mowers, strimmers, and edging shears
Many hedgehogs are mutilated or lethally injured by people mowing under bushes or hedges and in overgrown areas where they like to nest during the day. Long grass should only be cut after you have checked for hedgehogs – or preferably –not cut at all.

Garden forks
You must be careful when turning your compost heap. Hedgehogs could be sheltering in there.

Leaf vacuums
Leaf vacuums don’t only suck up leaves, but also invertebrates (hedgehog food) and even small hedgehogs. If you have to use one of these machines, blow away the leaves under bushes and hedges on a low setting.

Insecticides, weedkillers and artificial fertilizers disrupt the sensitive ecological balance in a garden. In addition they can be damaging to health both by external contact and also when ingested with food. The alternative is to garden organically! Do not use: 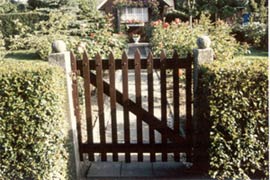 Wire fences can become traps for hedgehogs, they can injure them or limit their freedom of movement. Plant hedges, and let hedgehogs come and go as they please!

Chain-link fences
Hedgehogs can easily get stuck in course-meshed chain link fences when they are trying to climb through. Remedy: erect the fence from the start so that small animals can crawl underneath, or bend the wire up in a few places.

Electric fences, sheep fences
Electric netting, used widely in sheep husbandry, is a death trap for hedgehogs, if live strands of wire are too close to the ground. Alternative: use a flexible fencing system without vertical strands.

Bird nets in fruit growing and viniculture, fishing nets
Nets over fruit bushes should not hang down to the ground. Hedgehogs and birds can get caught up in them. In vineyards the nets must be pulled taut and raised 40cm off the ground. Lobster pots, fishing nets and lines should not be carelessly left lying around in the open – eg at campsites!

Baler twine, plastic film from hay and straw bales, rolls of wire
In and around farms, time and again hedgehogs get themselves trapped in carelessly discarded baler twine and pieces of plastic film or are just „disposed“ of with this rubbish. Rolls of wire should not be left lying on the ground, where they can endanger hedgehogs. 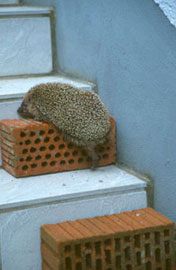 Pits, holes, trenches
Hedgehogs often fall into steep sided pits, holes, trenches or compost containers built on ground level, from which they cannot escape unaided. So you should put a plank as an escape ramp or bank up the end of the trench with earth to create an escape route. Suggest this solution to workmen digging trenches for gas, electricity, water, telephone and TV cables!

Cellar windows and light wells
To stop hedgehogs and other small animals from falling through cellar windows or light wells, they should be covered with fine-meshed grilles.

Cellar steps
If hedgehogs fall down the cellar steps they can easily escape if you put a brick sideways on each step to reduce its height.

Swimming pools and garden ponds
Hedgehogs can drown in steep sided garden ponds and swimming pools. A plank with crossways slats or a rush mat (at both ends weighted down with stones) can be lifesaving escape ramps.

Drains
Street drains and drainage ducts in vineyards are death traps for hedgehogs and other small animals, they either drown or starve to death in them. Fine grilles or escape ramps offer the animals a chance of freedom. In viniculture animal friendly constructions have already been introduced, which prevent these accidents. 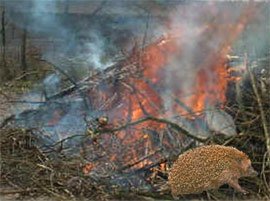 Immediately before burning garden waste – as far as this is permitted – you should carefully move the heap. Hedgehogs could be hiding underneath. The same applies to Bonfire Night – in Germany there are bonfires traditional, for excample at Easter or Midsummer Night.

Sometimes hedgehogs accidentally get shut in garages, garden chalets, tool sheds or greenhouses. If you make a little escape hole or a flap in the wall or door which only opens outwards, then the hedgehog can easily get out.

Dogs who like to chase can hurt hedgehogs badly or kill them. Hedgehogs frequently die when dogs dig them out of their winter nests. You should keep your dog under control out of doors, keep him on a lead when you take him for a walk in the evening and don’t let him rampage round the garden after dark on his own. Don’t leave any food in his kennel overnight! 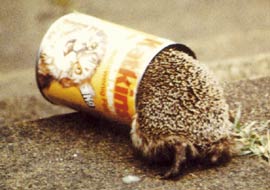 Hedgehogs search inquisitively for leftovers and get stuck in carelessly discarded containers like cat or dog food tins or yoghurt pots. If they are not found and rescued, they are condemned to death. Plastic bags and full rubbish sacks („yellow sacks“) should be tied up and not left longer than necessary in the open. Hedgehogs searching for somewhere to shelter will rip the plastic and crawl inside and then be carted off with the rubbish. Equally dangerous are plastic carrying rings round drink cans.

Traps should be placed at least 50cm off the ground on a table, or in a box, on a wall or stack of planks, so that they can only be reached by rodents and not by hedgehogs. You should do the same with poisoned bait. Poison should also be placed inside narrow pipes to protect birds and squirrels.