After a gestation period of 35 days, an average of four or five blind and deaf baby hedgehogs (hoglets) are born weighing 15-20grammes. The mother suckles her offspring for six weeks, the males have nothing to do with rearing the young. When they are three to four weeks old, the youngsters leave the nest for the first time and go on independent excursions, when they start to eat solid food. 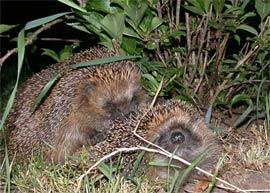 Depending on weather and climate, in Germany the hedgehog mating season runs from May to the end of August.

The courtship ritual is called the “hedgehog carousel”, as the male circles the female for hours. At first, the female reacts aggressively to her suitor with bristling spines on her back. When she submits, mating occurs in the same manner as other mammals: The female is mounted by the male from behind. During mating, she flattens her spines against her back. After their act of union, the couple separate. There is no “marriage” between hedgehogs. The male goes on his way and searches for other females, thus minimising competition for food.

Generally, hedgehogs (Erinaceus europaeus Linné 1758) in Germany only breed once a year in August and September. Data collected over twenty years (M. Neumeier) confirms this. Only in very mild regions, like the Cologne basin, the Rhine valley and Saarland are baby hedgehogs (hoglets) born as early as the beginning of July or even in June. In these cases, it is not impossible that a second litter might occur, but it is not at all likely, or corroborated by research data.

Hedgehogs in Germany have between 2 and 10 young in a litter. Data collected over many years (M.Neumeier) have established an average litter size of between four and five. It takes at least two and a half months from mating until the young are independent. 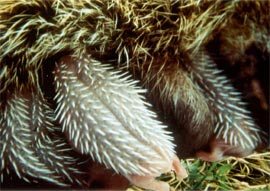 After a gestation period of about 35 days, the mother hedgehog gives birth to an average of four blind and deaf young, which she suckles for six weeks during the daytime. At night she goes foraging. At birth baby hedgehogs (hoglets) already have 100 soft, white spines, which are embedded in the swollen skin on their backs. The hoglets weigh between 12 and 25 grammes.

When they are 14 days old, their eyes and ears start to open. At 21 days their milk teeth erupt, a few days later the babies venture out of the nest for the first time and try to find food for themselves. To start with the little hedgehogs do not find much to eat, so the mother continues to nurse them until their sixth week. At six weeks old the young hedgehogs are independent and disperse.