Hedgehogs are crepuscular and nocturnal hibernating insectivores. In evolutionary terms, they belong to one of the oldest remaining forms of mammal. Their ancestors lived about 65 million years ago, and their appearance has remained unchanged for the last 15 million years.

The hedgehog which lives in Germany is called the “brown-breasted” or Western European Hedgehog, its scientific name is Erinaceus europaeus Linné 1758. 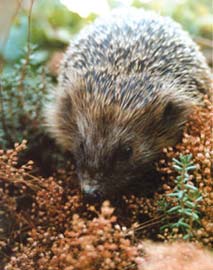 Adult hedgehogs measure 24-28cm long and weigh between 800 and 1500 grammes. Males are generally bigger than females. The only definitive external difference between the sexes is the position and shape of the genitals. The male’s penis sheath opening is a small knob-like structure, roughly where one might expect to see the navel. Whereas, the female’s vulva is directly in front of the anus.

The hedgehog’s spiny coat distinguishes him from all other native animals. At birth hedgehogs already possess 100 white spines which are embedded in swollen skin on their backs, adult animals have around 6000-8000 spines. When in immediate danger or if touched, hedgehogs roll up with their orbicularis muscle and bristle their spines. Read more under Spiny coat. 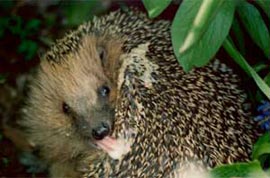 Hedgehogs find their food and others of their kind with their excellent sense of smell. Their hearing is also very acute, and they are able to hear high-frequency ultrasound. Their eyesight, however, is not very good.

When threatened, hedgehogs hiss, huff or snort. Sharp quacks or loud shrieks of pain or fear, sounding like the screech of a hacksaw, are occasionally heard.

An additional sense organ is the Jacobson’s organ. If a hedgehog encounters an unfamiliar smell or substance, such as fresh paint, he will sniff and chew at it, until he produces frothy saliva. Having examined the strange substance, he goes into bizarre contortions to put the saliva on his back. This strange behaviour has nothing to do with rabies.

The hedgehog’s skeleton is similar to that of other mammals, and unlike its spiny coat is quite unremarkable. 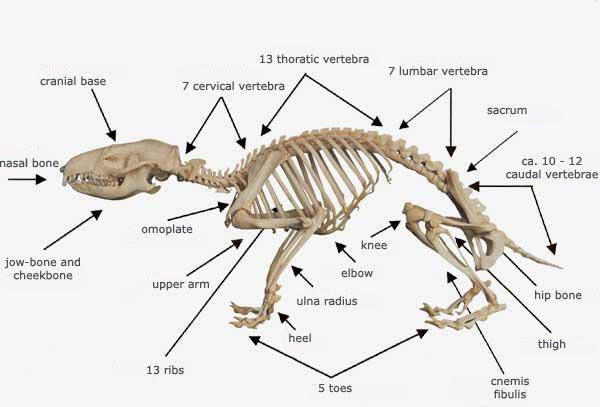 The hedgehogs’ main diet consists of carabid beetles, earthworms and moth caterpillars. They consider earwigs to be a delicacy, while woodlice do not taste very nice. They also eat snails, slugs, centipedes, millipedes, spiders and other invertebrates. They only eat vegetation by chance, for instance if a bit of grass sticks to an earthworm. Hedgehogs do not eat fruit or vegetables! 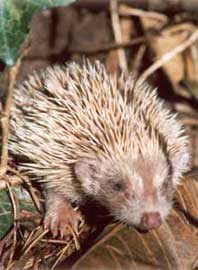 Depending on weather and climate, the mating season runs from May to August. In Germany about 80% of all hedgehogs are born in the months of August and September. By all accounts second litters are extremely rare.

After a gestation period of 35 days an average of 4 young are born. At birth the baby hedgehogs (hoglets) weigh 12-25 grammes, their eyes and ears are shut, and they already have about 100 spines. At two weeks old the eyes and ears start to open, at three weeks the teeth erupt. The mother nurses the babies for 42 days, during the daytime, as she goes foraging at night. When they are 25 days old the young leave the nest for the first time and go on little excursions, when they begin to eat solid food. They neither accompany their mother in the search for food, nor does she show them which prey to catch. At six weeks old the youngsters are independent and gradually disperse. Males have nothing to do with rearing the young. You will find more information under Reproduction.

Hedgehogs with white spines are found again and again. The white colouring is caused by a lack of pigmentation. Light sensitivity of the eyes and skin does not adversely affect a nocturnal animal like a hedgehog. Moreover, the spiny coat is usually so dirty that you don’t notice it is an albino until you take a second look. These hedgehogs become sexually mature and reproduce just like their brown-grey coloured cousins. The mutations remain exceptions, as in other animals, and do not persist in the wild population.

If you find albinotic hedgehogs or see such ones imprisoned or in a rescue centre: Please support hedgehog research and complete our (German) Online albino questionnaire! 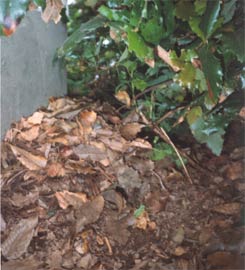 Hedgehogs hibernate as a means of survival during the winter months when food is scarce. During the autumn they lay down fat reserves which will serve as their energy supply. Because their body functions are reduced to a minimum during hibernation, they can go up to six months without food. In hibernation their heart rate is reduced from about 180 to about 8 beats per minute; they breathe only 3 -4 times instead of 40-50 times per minute. Their body temperature is lowered from 36 degrees to 5 degrees, but is always higher than the ambient temperature. During hibernation the hedgehog loses 20-40% of its body weight. Get more information under Hibernation.

In the wild, hedgehogs have a life expectancy of about 7 years. The average lifespan, however, is merely 2 – 4 years. Juvenile mortality is very high amongst hedgehogs. In addition, man-made hazards increase the mortality rate.