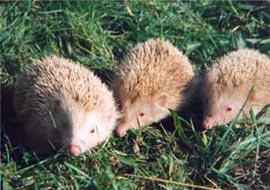 Since 1999 we have been collecting all the information we can about albino hedgehogs. For centuries time and again, white coloured hedgehogs with very pale spines and fur and red eyes have been sighted. The white coloration in mammals is due to lack of pigment. We know now that a spontaneous mutation is the likely catalyst. Breeding two animals with this mutated gene can produce white offspring. Albinism is most probably harmless to these white hedgehogs.

From time to time, albino hedgehogs are found proving that animals with this hereditary disposition mature and reproduce in the wild. Of course, the white colouring will not be so conspicuous as hedgehogs rummage about on the ground at least partly covered in dirt. We can therefore presume that albino hedgehogs are no more easily tracked by their predators than their normal coloured cousins.

The noted sensitivity to light of eyes and skin in albinos barely affects the noctural hedgehog. Other effects of albinism relating to fundamental low immunity or particular susceptibility to disease due to the gene mutation are as unproven in hedgehogs as in white coloured, red-eyed rabbits, rats and mice.

Albinism is the exception in hedgehogs, as it is in other wild animals, we must assume from current research that these mutations do not persist in the wild even if their repeated recurrence proves their ability to survive. Because of the small number of observations to date, only a few informed statements on albino hedgehogs can be made.

Please support us and complete the (German) Questionnaires. Many thanks for your co-operation!

Hedgehogs with white spines and leucistic ones are found now and again. The white colouring is caused by a lack of pigmentation. Leucistic hedgehogs have a little pigmentation for example black eyes or a creamy spiny coat.

Light sensitivity of the eyes and skin does not adversely affect a nocturnal animal like a hedgehog. Moreover, the spiny coat is usually so dirty that you don’t notice it is an albino until you take a second look. These hedgehogs become sexually mature and reproduce just like their brown-grey coloured cousins. The mutations remain exceptions, as in other animals, and do not persist in the wild population.