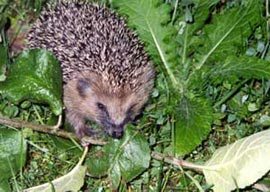 Sick and injured hedgehogs are found all year round, but orphaned hoglets are only found in summer. They must all -when they are fit again, or have grown up – “be released into the wild, as soon as they are able to survive independently”. (BNatSchG = German Federal wildlife conservation law, § 43 g Abs.6).

Healthy hedgehogs with no bacterial infections and no or only a low level of parasite infestation are fit for release. They should be eating well and be passing normal dropping.

In principle, hand reared hoglets and those taken into care as nestlings (under 8 weeks old) should be prepared for life in the wild in an outside enclosure. They can nearly always be released the same year, right into the autumn. 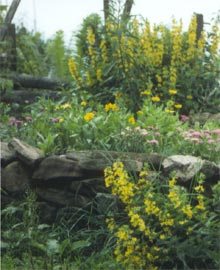 Adult animals and juveniles with an admission weight of more than 250g should be taken back to the place where they were found. Hedgehogs have an excellent memory for places! They know their way through fences, detours over walls or steep embankments, special places where food is plentiful, like compost heaps or certain flowerbeds. Hedgehogs who are not released where they were found must orientate themselves from scratch and are therefore more at risk at first.

If there is direct danger for life and limb in the place where the hedgehog was found – because of construction work or a road which is very busy at night – the animal should not be returned there. A new habitat must be found. The release site should provide both cover and food; the edge of young deciduous woodland with thick bushes and adjoining grassland and meadows is ideal habitat. A stream nearby is advantageous, and further away farmyards with old sheds, fruit trees and wild gardens. The edges of rural residential areas with penetrable fences, natural gardens and mature bushes and trees are also suitable release sites. 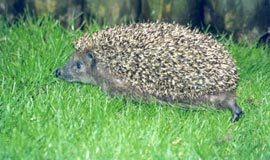 Prepare lodging in your own garden for the hedgehog. This can be a box (approx 30cm long) or a proper wooden house. Fill it with plenty of hay and/or straw and put it under some bushes. Put the hedgehog inside at dusk during a dry spell, and put his usual food and a bowl of water just by the entrance. Better still build or buy a weatherproof feeding house. Continue putting out food for up to two weeks.

If the hedgehog is not being released in your own garden, take him in the evening to the place you have scouted out beforehand. Avoid taking the hedgehog on the search for a release site! The ride should be as free of stress as possible. Prepare a nest with hay for the hedgehog in a sheltered place, under a hedge or in a copse and leave a little food there. Don’t leave any cardboard boxes or feeding dishes behind for the sake of the environment. 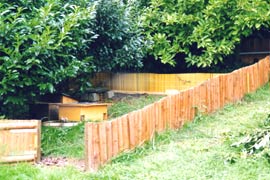 Juveniles, who weighed less than 250g when found, or adults who cannot be taken back to where they were found, should always be released from an outside enclosure – and this includes your own garden.

After about two weeks, let the animals out of the enclosure, by just opening it up. Continue putting food and water in the enclosure for the next one or two weeks. Leave the nest box in there too for the same length of time. This gives the hedgehog the opportunity to get used to his new surroundings gradually.

You should calculate a minimum area in the enclosure of 4 sq m per hedgehog – but an enclosure can never be big enough! Planks of wood, very fine wire netting, (bent over at the top to prevent escape!) or half-round palisade fencing are suitable for the walls of the enclosure which must be at least 50 cm high and buried 10-15 cm underground.
Freigehege

Portable pen as outside enclosures placed in a sheltered spot in the garden temporarily work well. (The IGSI e.V. enclosure in the photo was only put in an open meadow for demonstration purposes.)

Cleanliness is vitally important in the outside enclosure too. Food remains must be removed every morning without fail and the dishes washed in hot water.

If possible – whether in your own garden or somewhere else – it is important to put out food for released hedgehogs every evening for the first 1-2 weeks.

Studies in England and Germany have proved that hedgehogs who have been properly looked after in captivity over the winter, and are healthy when released, have no problems reintegrating into the wild and reproducing. Hedgehogs have been marked at release, or fitted with radio transmitters and so could be found again. Manfred Schubert a hedgehog researcher in Dresden (Leader of the “Berlin Hedgehog Research Group”) found 76.5% of the 111 animals he had previously released.

Of course the quality of care which the hedgehogs received during the winter i.e. appropriate housing, husbandry and feeding, plays an important role in the high rate of re-captures. Also the release method (e.g. from an outside enclosure or at the place where they were found) contributes greatly to the successful reintegration into the wild of hedgehogs which have been in care.